We organise weekly reading sessions on Chinese Classics. A reading session normally lasts for 1.5 hours, with the first 30 minutes dedicated on some 'ad hoc' texts and the rest 1 hour on one in our reading series. The 'ad hoc' texts are selected by the host, and span over a broad class of topics, such as Zhuangzi, poems, the art of war, etc. and changes over sessions. Texts in the reading series are normally well acknowledged ones and fixed over a period of time till finished. For this part, we have finished Daxue, Dao De Jing, etc. and the current text is Lunyu or the Analects of Confucius. Below are some texts we have read or are currently reading.

Mengzi or Mencius is our current text for the reading series. Normally this text is some well acknowledged Chinese classical text, selected by discussion of the participants. We always welcome suggestions on both the content and format of this reading series.

Texts for the reading sessions 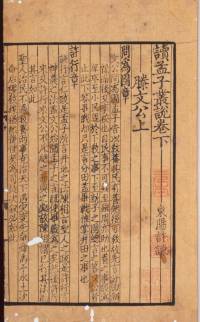 The Mencius (Chinese: 孟子; pinyin: Mèngzǐ), commonly called the Mengzi, is a collection of anecdotes and conversations of the Confucian thinker and philosopher Mencius. The work dates from the second half of the 4th century BC. It was ranked as a Confucian classic and its status was elevated in Song Dynasty. Zhu Xi, the scholar generally credited with the founding of Neo-Confucianism, included the Mengzi as one of the Four Books, and it became one of the canonical texts of Neo-Confucianism.

The special reading sessions are not the official activities by the society, purely motivated by the interests of our members. They are normally organised out of term time, and just for those who are interested.