Zhaungzi is an ancient Chinese Daoism classic named after an influential philosopher Zhuang Zhou (or Zhuangzi) in the Warring States period (475 BC - 221 BC) of China. The currently received text is the result of the editing and arrangement of a commentator Guo Xiang in Jin dynasty. It is composed of 33 chapters, divided into 3 sections: Inner Chapters, Outer Chapters and Miscellaneous Chapters. The Inner Chapters include the first seven ones and are generally agreed to be the work of Zhuangzi himself. The Outer Chapters ( from 8 to 22 ) and the Miscellaneous Chapters ( from 23 to 33 ) are commonly considered to be the work of a school of Zhuangzi's followers and other later Daoists.

The text is characterised by its vivid, imaginary and romantic style of writing, flourished with fables and stories, illustrating some profound ideas. For example, here is the famous butterfly story from the text: 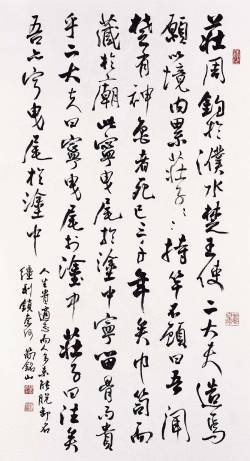 “Once Zhuangzi dreamt he was a butterfly, a butterfly flitting and fluttering around, happy with himself and doing as he pleased. He didn't know he was Zhuangzi. Suddenly he woke up and there he was, solidly and unmistakably Zhuangzi. But he didn't know if he was Zhuangzi who had dreamt he was a butterfly, or a butterfly dreaming he was Zhuangzi. Between Zhuangzi and a butterfly there must be some distinction! This is called the Transformation of Things. ”
The Inner Chapters, namely Carefree Wandering (Xiaoyao you), On the Equality of Things (Qi wu lun), Essentials for Nurturing Life (Yang sheng zhu), The Human World (Ren-jian shi), Symbols of Integrity Fulfilled (De chong fu), The Great Ancestral Teacher (Da zong shi), Responses for Emperors and Kings (Ying di wang), form the core of the philosophical ideas of Zhuangzi – a manifestation of the Dao or the Way through various spontaneous phenomena, and provide a series of original insights into human nature and the nature of the cosmos, as opposed to the methods or doctrines practised by its contemporary Confucianists.

In this reading session, Chapter 17 — The Floods of Autumn from the Outer Chapters is covered partially, focusing on three fables: tortoise in the ancestral temple and tortoise in the mud, Zhuangzi visited Huizi in state Liang, and the talk between Zhuangzi and Huizi over happiness of fish.