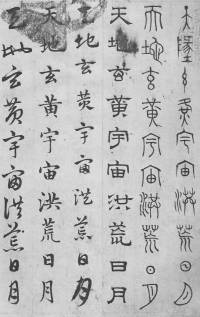 The Thousand Character Classic, originally titled “Ci Yun Wang Xi Zhi Shu Qian Zi”, is one of the Chinese MengXue (Elementary study) texts for teaching Chinese characters and calligraphy to children. The author is Zhou Xingsi (AD?-521) of the Southern dynasties' period Liang Dynasty (AD502-549). It is said that Emperor Wu of the Liang Dynasty selected one thousand non-redundant characters from the work of a finest calligrapher Wang Xizhi (AD 321-379) for his princes to practice calligraphy. He then commissioned the widely learned and talented scholar Zhou Xingsi to put these isolated characters into meaningful sentenses with rhymes. In only one night, Zhou Xingsi composed a fully rhyming text of 250 four-character couplets. Legend also has it that his hair and beard went completely white during those momentous hours.