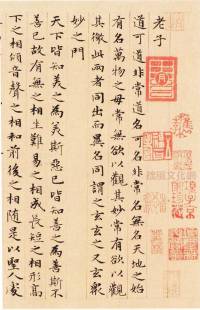 Laozi (around 6th century BCE) is a great philosopher of ancient China, especially famous for his great work, the Tao Te Ching. According to popular traditional biographies, he worked as the Keeper of the Archives for the royal court of the Zhou Dynasty (1046–256 BC). This reportedly allowed him broad access to the works of the Yellow Emperor (around 2700 - 2600 BCE) and other classics of the time. Then, realizing the decline of Zhou, he headed west, eventually departing from society at Louguan (west of modern Xi'an). Illustrations commonly show him riding on an ox because, after having delivered the Dao De Jing to Yin Xi at Louguan, he is said to have disappeared westward traveling on such an ox. He was regarded as the god of religious form of Taoism.

The Tao Te Ching, often called simply Laozi after its reputed author, describes the Dao (or Tao) and the De (or Te), as its name suggests. Dao is the source and ideal of all existence: it is unseen, but not transcendent, immensely powerful yet supremely humble, being the root of all things. De is the utility or appearance of the Dao. De basically means “virtue” in the sense of “personal character”, “inner strength” (virtuosity), or “integrity”.