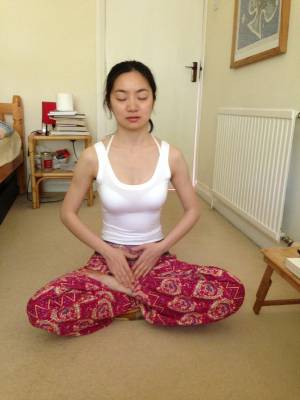 一、 通气补气 Supplement of Qi in circulating the breath

Breathe in deeply, and the chest comes up naturally, with a feeling that the upper body has been raised up, and the shoulders shrug/come up naturally. Concentrate on the feeling that when the Qi comes into the chest, there is a feeling of fullness inside the chest. The chest is full of Qi.

After the whole chest is filled with Qi, raise the two elbows at the same time until the elbow points entirely facing upward. Turn the two arms outward continuously in a circle around the axis of shoulders.

Let the two elbows be fully open and point outward completely, being at the same level as the shoulders. Now hold the breath for a few seconds.

As you exhale, lower the shoulders, and lead the two elbows back to their original place.
++++

Slowly open the two elbows towards the two sides of the body.

Inhale slowly, try your best to direct the points of the elbows backward and then upward. Meanwhile, let the chin come inward; the back come upward in the form of an arch, and try your best to extend your spine upward.

Focus on the feeling that through breathing, your chest and back are full of fresh Qi.

Now the points of the elbows are pointing straightly upward, and the two arms touch each other.

Slowly let the elbows come down and at the same height as shoulders.

Exhale and bring the head back to the original middle point.
++++

Fold the two hands upon each other on the chest — left palm touch the chest and right hand rests upon the left hand — keep the position for 30 seconds.

Focus on the feeling of your chest underneath your palms.
++++

Keep the left hand above the right one. Let the palms slide downward and reach the upper abdomen. The two thumbs touch each other at the position of the middle point of the chest. Keep this for 30 seconds.

Focus on the feeling of the upper abdomen under your palms.

Let the palms slide downward continuously, separate the palms with the thumbs still touching each other. Fold the palms upon the belly, and the navel is in the middle of the triangle that formed by your hands. Keep this gesture for 30 seconds.
++++

Let the palms slide toward two sides of the body continuously.

When the thumbs reach the middle points of the last ribs, let the other fingers turn upward, and the four fingers of the two hands point toward each other on the back. Keep the gesture for 30 seconds.

Focus on the feeling of the waist under the palms.

Slide the two palms continuously downward, until the ring fingers reach the lowest point of your tailbone.

Fold your palms upon the knees for 30 seconds, focus on the feeling of your knees under the palms.

Let the palms slide through the lower legs.
++++

Fold the two palms upon the lower abdomen, with left hand below the right one. Focus on the feeling that Qi is going through smoothly in your whole body.

Deeply inhale and focus on the feeling that your chest is full of Qi.

Smile happily, now the process of Supplement of Qi by Fairy Maiden has completed successfully!

Do the whole body breathing for three times, and feel how your body is nourished through this practice.

二、运气补气 Supplement of Qi in transporting the Qi