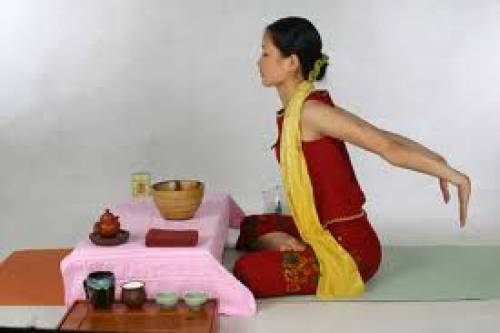 From some perspectives, all changes can be viewed as ‘Daoyin’. ‘Daoyin’ means the state of being in motion (动). From a deeper perspective, even the state of being tranquil or quiet (‘静’) is also a process of ‘Daoyin’. Human life is a phenomenon of ‘Daoyin’. ‘Daoyin’ also means breathing. People’s lives could not exist without breathing. Through the Daoyin breathing exercise, our inner energy and wisdom can be revealed.

一、 打开导引 Daoyin exercise of opening up

This is a preparation for the Daoyin breathing exercise of the next stage. It is only for people whose bodies are not very flexible.

Now to begin:
Breathe deeply in, your abdomen comes inward, and your chest expands naturally, with some energy, push your two arms upward. Your spine will extend upward, reaching the highest point, with your left palm facing upward.

Exhale, bend your elbows, bring your two hands back, and place the back of your right hand close to your hairline again.

Repeat the above three times.
++++

Now to begin:
Inhale deeply, push your two hands forward hard, until they reach the furthest point, and expand your back — shrinking bosom slightly and ensure that the back is straight.

Exhale, bend your elbows, and bring your hands back to your chest, with the back of your left hand close to your chest. The body comes back to the original straight position.

Repeat the above process three times.
++++

++++3. 打开后推导引 Opening up and pushing backwards|

Preparing your posture:
bring your two hands together behind you with fingers intertwined, and rest the back of your hands against the waist.

To begin:
Inhale deeply; push your two hands backward, until they reach the furthest point, and lean your body forward slightly.

Exhale, bend your elbows, and bring your two hands back to your body, resting the back of your hands against your waist. Bring your body back to its original position.

Repeat the above process three times.
++++

When we start to do the ‘Daoyin breathing exercise’, we should view ourselves as a ‘Dao ren’ （道人）, a person who is in harmony with Dao, a happy and free person. Focus your mind on the DANTIAN, let your breathing lead your body’s movements and mind; and close your eyes gently

Straighten your back naturally, and overlap your hands placing them at the DANTIAN (also the position of the pelvis bone), with the left hand below the right hand, and the thumbs touching each other, forming a straight line. The palms are facing upwards. This kind of hand position is called ‘三昧印’, or ‘定印’ .

While breathing out, we do “three crosses” in three different levels of your body: cross the thumbs, cross the wrist of your hands, and cross the arms.

When breathing out, firstly cross your thumbs: move the two thumbs at the same time towards each other, with the point of right thumb moving along the middle line of the left thumb, and then across with the left thumb, the two palms facing upwards.

Move the two hands toward the front and upward continuously. At the same height of your naval, the two wrists cross with each other, with the ten fingers pointing upward and the two hands facing upward naturally.

Move the two hands continuously toward the front and upward. At the same height of the upper abdomen, the middle point of your lower arm cross with each other.

These three crosses is a whole and should be done continuously, without any stop in the middle. During this process, focus on the feeling that the energy is corresponding at the crossing points (thumbs, wrist, and arms), rather than the feeling of the touching of the skin.
++++
++++（3） 停气外转贴额 Hold the breadth, turn outward, and touch the forehead |

After finishing the process of exhaling, hold the breath while perform the following actions:

Open the two elbows towards the two sides continuously, and at the same time turn the wrists outward continuously. At the same height of the nose, use the right hand to hold the left wrist. When the back of your hand touch the hair line above the forehead, let the thumb and the middle finger of the right hand touch with each other. Hold the wrist lightly and do not exert any force.

There are five stages in doing it:

1. Put the mind at Huiyin, and pull in the anus gently. Note that you need to keep your mind clean and clear, and don’t concentrate on Huiyin too much which may stimulate the Qi and blood there and further stimulate sexual feelings.

3. When the centre of the Qi arrive at the upper abdomen, let the two hands that rest against the forehand go upward naturally. To feel that the centre of Qi is coming from the lower abdomen, upper abdomen, the chest, neck, head, and the empty space above your head. The energy of Zhongmai (中脉, the middle line of your body) comes through your Huiyin to the earth, and through your head to the heaven, thus the life exists in harmony with the earth and the heaven.

4. When the centre of the Qi comes through the chest, the chambers of the chest and the ribs at the two sides expand upwards and outwards. The two arms go upwards continuously.

5. Your thoracic cavity is full of Qi. When you cannot breathe in anymore, raise the shoulders a little bit and make the two elbows completely straight.

++++（1）屏气打开双手 Hold the breathe and the open the hands |
While holding the breath, slowly loosen the thumb and the middle finger of the right hand, and the two hands will spring apart naturally. Normally the distance between the two hands is as wide as the shoulders. If your shoulders are stiff, the distance would be wider than the shoulders. But don’t control the distance between the hands by yourself, and let it go naturally. Keep the body still during this process.
++++
++++（3） 呼气脸前交叉Exhale and cross in front of the face |
Exhale slowly; turn the two arms facing toward you, and cross the two lower arms in front of your face. Put the left arm inside and right arm outside. The two palms are facing toward your body. Be aware that don’t let the two arms fall down: the points of the two elbows are not lower than the shoulders.
++++
++++（4） 停气内转贴胸 Hold the breadth, turn inward and touch the chest|
Hold the breath; open the two elbows towards the two sides of the body, with the two arms turning downwards. Cross the two wrists at the same height as the nose, with the two palms facing towards the two sides of the body.
Open the two elbows continuously, and at the same time turn the wrists. At the same height as the neck, the left thumb and middle finger hold the wrist. When the back of the left hand touch the chest, the thumb and the middle finger touch each other and form the ‘Buddhist hands gesture’.
++++
++++（5）吸气双手前推 Inhale and push forward the two hands|
Use the chest to inhale, the energy of the Qi will push the two hands towards the front. As the Qi comes in, the thoracic cavity expands, and the ribs and the back also expand outward. Extend the two arms continuously, until the two elbows completely straight. The palm of the right hand faces toward the front. The arms are at the same height as the shoulders. Now hold the breath.

++++ (1) 屏气打开双手 Hold the breath and open the two arms|
When holding the breath, slowly loosen the middle finger and the thumb of the left hand, the two hands will spring apart naturally.
++++
++++ (2) 呼气胸前掌上 Exhale and turn the arms in front of the chest|
Breathe out slowly, turn the two elbows facing toward you, which leads the arms and the palms to turn as well, and then the palms facing upward. Be aware that during this process it is the turning of the elbows, rather than just turning of the wrists.
++++
++++(3) 停气手腕内转 Hold the breath and turn the wrist|
Hold the breath, the ten fingers keep separately. Now turn the wrists until the ten fingers point downwards and the palms face backwards.
++++
++++(4) 吸气双手后推 Exhale and the two hands push backwards|
Breathe naturally, keep the body straight, the lumbers come forward, and the butt comparatively backward, there are energy forming naturally at the pelvis.

Inhale slowly. As the chest expand naturally, push the two hands backward through the armpits, and keep the two arms horizontally towards the two sides of the body.

With the two elbows pointing toward the front, and the two wrists toward the back, the heel of your hand push hard backward, until your two arms are completely straight and you cannot breathe in any more. Now hold the breath.

4. 运气合上导引 Fold the palms, transport Qi and go up straightly

++++(1) 屏气打开双手 Hold the breath and open the two hands|
While holding breathe, keep the other parts of the body still, and loosen the wrists gradually, and the palms change from facing backward to facing upward.
++++
++++ (2) 松开呼气内转 Exhale the breath and turn the arms inward|
Exhale gradually and the body comes back. The two arms gradually turn towards the body and come to the two sides of the body, forming a 45 degree angle with the body, the two palms facing downwards.
++++
++++(3) 停气双掌向上 Hold the breath and the two palms facing upward|
Hold the breath, let the arms continue turning and go upward. The body now comes back to the middle and become straight. The two palms face upward. The height of the arms is a little bit lower than the shoulders.
++++
++++(4) 吸气双手合上 Inhale, fold the two hands, and going upward straightly|
a. Put the mind on Huiyin, contract the pelvic floor muscles or the muscles around the anus or rectum the anus.
b. Contract your abdominal muscles in tightly the lower abdomen
c. Inhale, feel the Qi coming up from the lower abdomen gradually to the chest, expand the chest, the two arms go upward
d. The two hands fold together upon the head.
e. Raise the shoulders a little bit, and completely straight the two elbows.
++++

5. 运气直下导引 Fold the palms, transport Qi and go down straightly

++++(1) 屏气慢慢往下 Hold the breath and go down slowly|
While holding the breath, separate your elbows apart towards the sides of your body; keep the two palms folded, until they reach the forehead.
++++
++++ (2) 呼气合掌胸前 Exhale and fold the palms in front of the chest|
Exhale gradually. Keep your hands folded together and allow them to be placed in front of the chest. The elbows open towards the two sides of the body and the lower arms form a horizontal line. It is hollow between the folded two hands, which is like a bud of the lotus flower.
++++
++++(3) 运气气脉相应 Transport Qi and correspond with the pulses|
Keep this position with your hands folded in front of your chest, breathe naturally, and meditate, following these sentences:

Do the meditation following these sentences for 1-3 times. Keep calm, peaceful, and the natural breathing. In this way, you could keep and energy of Qi formed during the Daoyin Breathing exercise.
++++
(4) 吸气满心欢喜 Inhale and the heart is full of joy (smile gently)

++++(5) 呼气掌心向下 Exhale and the palms turn downwards|
The two elbows open toward the two sides of the body, leading the small fingers, ring fingers, and middle fingers separate gradually. The index fingers and thumbs still touch together. Turn the wrist downward. Apart from the thumbs, all the other fingers are facing downward.
++++
++++(6) 停气掌心向腹 Hold the breathe and face the palms toward the lower abdomen|
Hold the breath. The two thumbs are still touching each other, and the two palms move towards each other while touching. The right hand is inside and left out. Keep the two thumbs in a straight line.
++++
++++(7) 吸气掌心向上 Inhale and the palms facing upward|
Keep the position of the hands, inhale, and turn the wrist upward. Return the body to the position before Daoyin breathing exercise.
++++

6. 呼气慢慢收回 Exhale and and finish the Daoyin breathing exercise